At the age of 12, I remember vividly hearing Smokestack Lightning by Howlin’ Wolf for the very first time. The man’s voice and the overall sound of that astonishing record was an integral part of my journey to discover the wonderful world of rhythm and blues. Wolf’s passing in 1976 was much mourned by fans and fellow musicians and he left a void that was never quite filled again.

In 1995 when I found out that Howlin’ Wolf’s former guitar player, the great Hubert Sumlin was going to play the Burnley Blues Festival, I immediately applied for a photo pass.

After the press conference on the day of Hubert’s appearance, I hung about and somehow got into a conversation with the man himself. After a while talking about music and Chicago Hubert suddenly said, “Man, I could do with a smoke of green.” I must have had a smile as wide as his guitar case when I said, “Let’s go outside Hubert and we’ll see what can we do.”

Finding a secluded spot I rolled a number and we sat enjoying some ‘herbal refreshment’ and talking about Howlin’ Wolf and the other great musicians on the Chess record label. Hubert starts telling me about the time around 1956 when he and the Wolf had fallen out and he joined the Muddy Waters band.

The problem was, Hubert explained, the band liked a drink and other recreational pursuits so much that Hubert ended up driving the bands’ van all the time. This resulted in an unpleasant case of piles (haemorrhoids) so he rung Wolf up and all was forgiven.

So here I am, sat with a rhythm and blues legend and a man revered by the likes of Keith Richards, Eric Clapton, Jeff Beck et al, getting pleasantly high and he’s telling me about his piles. I know one 12 year old boy who would never have imagined that scenario.

Hubert Sumlin was a true gentleman and it was a delight to share a reefer with him. I was saddened when he died in 2011. 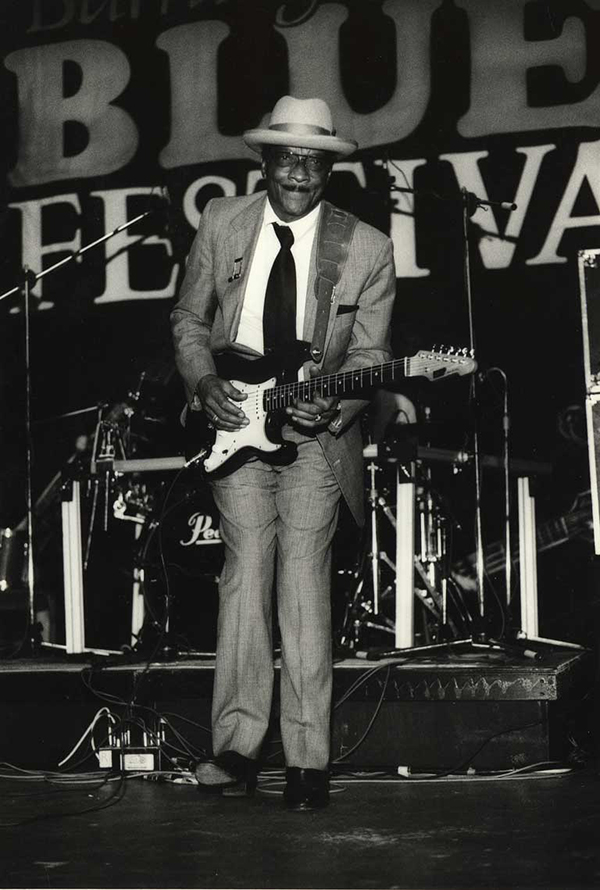