IN COD WE TRUST, Grimethorpe, near Barnsley 2002.

Grimethorpe Colliery was closed down in 1993 and the village entered a period of social and economic decline with employment more than 50%. The struggle to revive the village was widely reported. This is an edited article from The Los Angeles Times, 2004:

Twenty years ago, in March 1984, the miners of Grimethorpe and dozens of other coal communities in Britain went on strike hoping to scuttle Prime Minister Margaret Thatcher’s plan to shut 20 pits with the loss of 20,000 jobs.

Thatcher won the epic showdown, and changing economic and political realities have since all but wiped out Britain’s mining industry. Today more than 150 mines are closed, taking with them almost 200,000 jobs, and villages like Grimethorpe are struggling to find a new reason to exist.

Grimethorpe’s mine closed in 1993; the coking plant, power station and a densely packed district of miners cottages were demolished.

In 1996, the filming of Brassed Off, about a mining community facing closure of its pit, brought temporary attention to Grimethorpe – the ‘In Cod We Trust’ sign on the main street is a visual reminder. The fish and chip shop was named by the film’s writers.

Now the building is one of many bricked up or boarded over properties in the village, whose streets straggle among empty lots in sight of open fields and slag heaps covered in scrubby grass. The colliery band still exists, but its members are now professional musicians rather than local miners.

The population has fallen to 4,600, and jobs are scarce. A third of the labor force is neither working nor seeking a job.

Many former miners have given up on working again or are on long-term disability benefits. Many young people have moved away, and the quiet streets invite vandalism and burglary.

Thankfully,  Grimethorpe is becoming a very attractive village now and the problems that blighted it after the pit shut have all but gone.

(See the five previous photographs and the next shot). 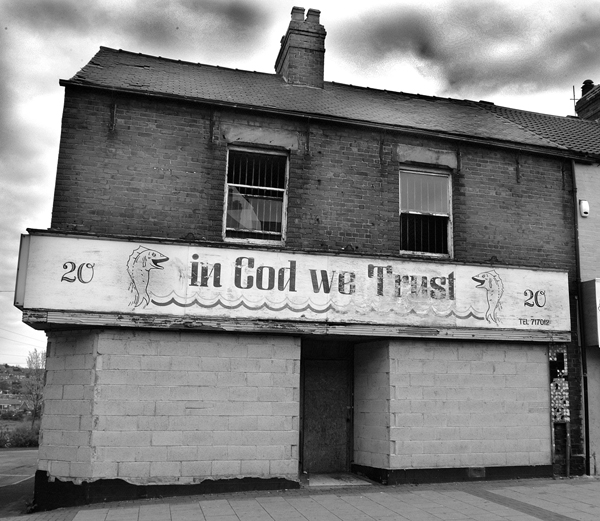