The Peabody (‘The South’s Grand Hotel’ as it likes to be known) is also famous for the March of the Peabody Ducks. Since 1933 the ducks have marched along a red carpet into the hotel’s lobby fountain twice a day.

I myself marched into the lobby of the Peabody one morning in 1996 to talk to the concierge. I wanted to see if he knew anything about the blues greats, such as Furry Lewis, Robert Wilkins, Papa Charlie McCoy and Speckled Red, who had recorded seminal tracks in rooms at the Peabody for the Brunswick and Vocalion labels in the 1920s.

The concierge didn’t know about the recordings, but was interested when I told him about them. As we were having a chat I glanced down and saw on his desk a piece of notepaper with the words ‘Jerry Lee Lewis, Grand Ballroom 8pm.’ It turned out the fireball from Ferriday, Louisiana was playing that evening before a mainly invited audience, but fortunately, I managed to get the last two tickets. I’ve always been a big fan of the man they call ‘The Killer,’ and I couldn’t wait to get back to our room and tell Katy that there was gonna be a whole lotta shakin’ going on that very night in our hotel.

I’d bumped into Kris Kristofferson, on the way into the Grand Ballroom and managed to get a decent shot of him, so the evening was off to a good start.* It was a seated affair around large circular tables with a lovely meal provided, a bit too posh for our liking, but what the hell – it’s not often you get to see Jerry Lee Lewis live in Memphis.

Despite the calls from the cream of Memphis society for rock and roll, Jerry Lee started with some country songs which was fine by me, I love his country stuff. One particular annoying rich slob was constantly calling out for Jerry Lee’s c&w smash from 1977, Middle Age Crazy. When the guy got up from his table, presumably to go for a slash, Jerry Lee waited for him to leave the ballroom, stopped mid-song and then began singing Middle Age Crazy. When the fella came back it was to hear the dying notes of his favourite song.

Not long after that, the concert was interrupted when a man appeared on stage with a big red book, (Eamon Andrews style for those old enough to remember) and it turned into a cheap rate ‘This Is Your Life’ fiasco. Jerry Lee wasn’t very happy and grumbled throughout. When some of the guests came on the big screen, via the satellite link, explaining they couldn’t make it but wished they were there, Lewis would growl and mutter about them not caring enough about him and not making much of an effort to come to Memphis. Sam Phillips, the legendary owner of Sun Records which gave the Killer his rock and roll hits, came onto the stage, only to be virtually ignored by Jerry Lee who had fallen out with him years previously and wasn’t gonna start making amends now.

Eventually this part of the show ground to a halt and the concert resumed. Several guest stars performed with the great man but the highlight for us was when Kris Kristofferson and Jerry Lee Lewis sang Me and Bobby McGee (written by Kristofferson with Fred Foster in 1969 and recorded by The Killer in 1971). Terrific stuff indeed.

I was glad, but not proud, that I’d ignored the ‘Do Not Take Photographs’ instructions and managed to fire off a couple rolls of film. So it goes.

(*See the previous and next photographs). 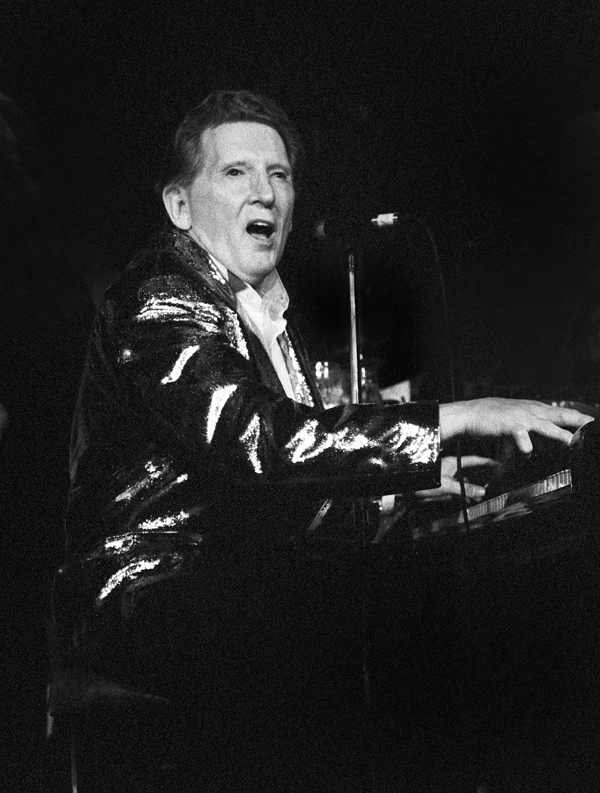