This photograph was commissioned by an advertising agency whose client wanted a shot of a cow for a milk promotion. The brief was simple: A close up of a black and white cow with its ears stuck out. I was shown some photos that other photographers had taken and I wasn’t that impressed – if I could get closer than they did, I could take a much better shot.

Sensing some lucrative easy pickings, I thought: visit a local farm, take the shot, deliver the image, send my invoice in and get well paid for once for doing relative little work.

I rang a farm just a few miles down the road from my house and I explained what the shot entailed. I was there half an hour later and was shown to a field and was left to get on with it. The first thing that I realised was how big cows are. I prefer towns and cities to the countryside, so getting close up to one of these big bastards was a real shock.

I was beginning to feel a little uneasy as I took my camera out of the bag and put on the best lens for the job. As I approached the cow of my choice, it began to back away. I found myself talking to it as David Bailey might have spoken to one of his sixties supermodels. Calling it, ‘baby,’ and offering the beast words of encouragement was having no effect whatsoever, the cow wasn’t up for it and was now reversing even faster.

Suddenly I heard a ‘dragging’ noise behind me and turned to see a very large and very angry bull preparing to charge in my direction. Was he annoyed at the way I was trying to entice his lady? Or perhaps he wasn’t fond of my premium hide cowboy boots? Obviously I had no idea but I needed to get moving fast. I wouldn’t have thought it was possible that I could run so quick and leap over a fence with a camera around my neck and with a heavy bag of equipment –  had there had been an Olympic event for this, I would have been a qualifier by a country mile. I landed on the other side of the fence as the bull pulled up just short, nostrils steaming and looking seriously pissed off.

I went home, quite rattled it has to be said, and had a relaxing herbal roll up. I rang the ad agency and they suggested I went to the Great Yorkshire Show, which was starting the following day in Harrogate.

Arriving at the show grounds, I came upon a group of farmers next to the cow sheds (one of them was actually chewing on a straw). I explained what had happened the day before and, after pissing themselves laughing, they agreed to help me. They brought a cow out and one of them tied a rope around his neck and held it as still as he could. Another one went behind the cow and started making loud ‘moo’ noises and, as the cow pricked her ears up, I started taking the shots as close up as I could get.

The images looked good on the digital camera’s display and I was more than pleased. On my way to the ad agency, I stopped and captured a near perfect field. When I arrived at my clients we Photoshopped the rope out, dropped the cow onto the field and the result is the picture you see below.

That same day the Yorkshire Post displayed the headline: ‘YORKSHIRE FARMER GORED TO DEATH BY BULL.’ A farmer, about thirty miles away had been killed, roughly at the same time I was being chased by that bloody bull. Makes you think, don’t it? 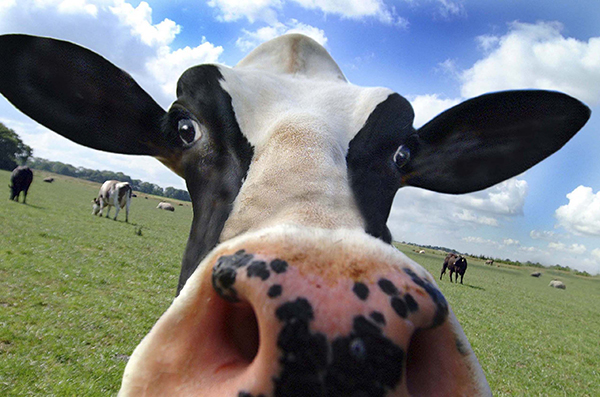