A collection of writers, musicians, artists and a sole photographer visited New York in 2000. The trip was organised by the much missed Yorkshire Art Circus. The purpose of the visit was to attend the Poetry Project which had been held at St Mark’s Church in the East Village Bowery since 1966. Paul Blackburn, Allen Ginsberg, W.H. Auden, Frank O’Hara, Patti Smith and Lennie Kaye had all performed at St. Mark’s so we were gonna be in good company.

On our way to the venue, we detour and visit the White Horse Tavern, where we pay our respects to Dylan Thomas, who had his final drink there before dying a few days later.

Some of our entourage decide that drinking themselves into a Dylan Thomas-like stupor would be a good idea. The others take the view that smoking some of the weed scored in Washington Square Park a few hours earlier might be a better idea. And some of us go for the ‘f**k it’ option of doing both.

Reeking of booze, dope and adrenaline, we go into St Mark’s for the poetry readings. Our guys are like a cross between Gil Scott-Heron, Kerouac, Ginsberg and Lenny Bruce and they blow the regulars away, much to our delight. A five foot ball of fire, named Dobie Danger, tells us, ‘You guys are the new New York.’

With such high praise ringing in our ears and Dobie Danger tagging along for the ride, we take taxis to the Motor City Bar in the lower east side. The Ramones used to hang out there and that was good enough for us – cheap beer, bourbon and a great jukebox. We look out of the window as our taxi pulls up to see Dobie Danger kicking the door of the cab she and some of our fellow travellers have arrived in. Expletives and violent gestures fill the cool winter air.

She seems to calm down after several Wild Turkeys. It doesn’t last long. Dobie gets into an altercation with a biker, some fourteen inches higher than her, his head makes a good target so she throws a glass of bourbon at it. It’s time to leave.

We arrive in Greenwich Village and trudge through the snow to the Blue Note Jazz Club. A guy comes over and starts boasting about his lifestyle as Christie Brinkley’s PR man. He asks Mr D and me if we surf. We look at each other, bedraggled and getting the worse for wear, and say to the supermodel’s promo man, ‘Do we look like f***ing surfers?’ Before he can reply our comrade in arms, Clayton Devanny, staggers over and starts telling him, for some bizarre reason, about a pork pie he’d eaten in Featherstone before leaving for the airport. The fella doesn’t know what a pork pie is and mutters, ‘You guys are just too weird, I’m outta here.’

We go over the road to The Fat Black Pussycat. A red curtain cuts the large bar into two. We enter the room behind the curtain into another world. An eclectic collection of furniture, lamps, candles, eastern rugs and a wonderful display of bric-a-brac make it a peaceful and accommodating experience – plus we also have some weed left, so that helps as well. The red curtain and this trippy room would be the inspiration for Pontefract’s Tap & Barrel many years later.

All was good, we were at peace. Good music, good smokes and good vibes. Hours later, some have fallen by the wayside and those of us who are left head for the Empire Diner, where Bette Davis used to eat regularly. We’re nighthawks at the diner for sure and we breakfast on eggs, cigars and bourbon. At seven in the morning we put our hands in our pockets, Bette Davis style and head back to the hotel.

Later we go to a matinee performance of a one man show about jazz legend, Thelonious Monk. I nearly get into a fight with a New York Times photographer because he is a twat and I’m not – or is it the other way around? Coming out of the theatre an opportunist stall holder is selling black berets. We reason that if wearing a beret is good enough for Thelonious Monk, it’s good enough for us, so we all buy one.

Arriving at a snow covered Central Park a thought hits me like a freight train. I’ve been too stoned for too many years – so I decide to smoke my last ever joint. After that, and in high spirits, we all head off to the Museum of Modern Art.

I gaze in wonderment at a Picasso painting of a guitar player, with heightened senses brought on by the strong herb. I suddenly find myself talking aloud about the image before my eyes. I turn to see a small crowd gathered around me, they think I’m an official guide. I giggle and carry on – it’s a nice way to remember that one last smoke. 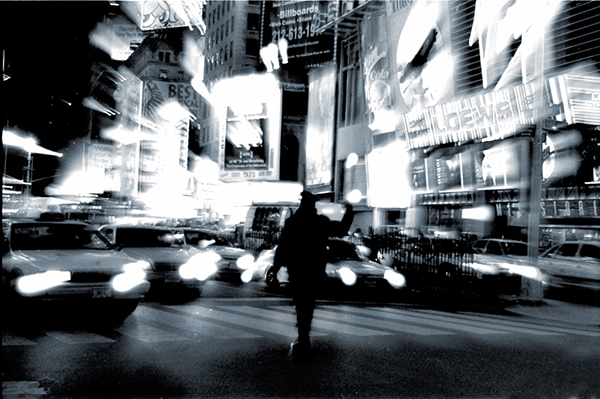