After leaving New Orleans and travelling up Highway 61, we stayed overnight in Clarksdale, Mississippi. Clarksdale has produced some of the greatest names in the history of blues music and especially for Ian and myself it was one of the highlights of our trip.

Throughout our time in the USA, Fuff made no concession whatsoever that Yorkshire sayings might not be understood by 99.9% of the American public. Not only did he keep on saying them, totally ignoring the baffled looks his listeners gave him, but his accent got broader by the day.

Outside Clarksdale, we stopped at a roadside diner where Fuff put aside the menu and told the teenage waitress, “Full bag of mashings, love” (meaning a full English breakfast). Even we hadn’t heard this saying at the time, but Fuff expected the poor girl to know what he was talking about. He became quite exasperated and kept repeating the order, talking slower and with more emphasis on each word, but to no avail – he might as well have been talking in Swahili.

After checking in at a motel in Clarksdale for the night we hit a nearby bar and soon got talking to the locals. While Ian was having an intelligent conversation about the blues with one of the regulars, Fuff was leaning on the bar talking twenty to the dozen to another customer who looked like the most confused man in Mississippi. Les and I started listening in and heard the following sentence: “I’ll tell thee how I remember t’ date old cock, ‘cos me and Horton had been t’ pox clinic in Wakey that day.” Fuff expected this poor fella not only to know who Horton was, but also to be familiar with the Clayton Hospital (where sexually transmitted diseases were treated) in a town called Wakefield. He then announced that he was going for a slash and would finish the tale when he got back. The man turned to me and Les and said, “I can understand you fellas, but what the f**k is that guy talking about? Man, I’m outta here.” He drained his beer and left in a hurry.

Later we came across half a dozen guys in another bar and we drank and smoked ourselves stupid until the wee hours back in our motel room. We met them for a late brunch and they invited us to go clay pigeon shooting at a nearby cotton field. A flatbed truck pulled up and the driver dragged back the tarpaulin to reveal enough handguns, rifles and shotguns to invade Cambodia. They were impressed with Les’s shooting skills as he blasted the clay pigeons out of the sky, never missing his target. Gradually, they started making very strong racist comments about the workers who would have toiled in the cotton fields we were shooting over. It got uncomfortable and we told them we had to be in Memphis by nightfall and were leaving soon.

They suggested we leave the following morning and attend a rally they were going to that evening. When we asked what kind of rally, one of them answered that it was the kind that we wouldn’t feel the cold night air because of the burning crosses. Somebody else chipped in and said they had some nice white hoods that would fit us perfectly.

We were on the road to Memphis within the hour. 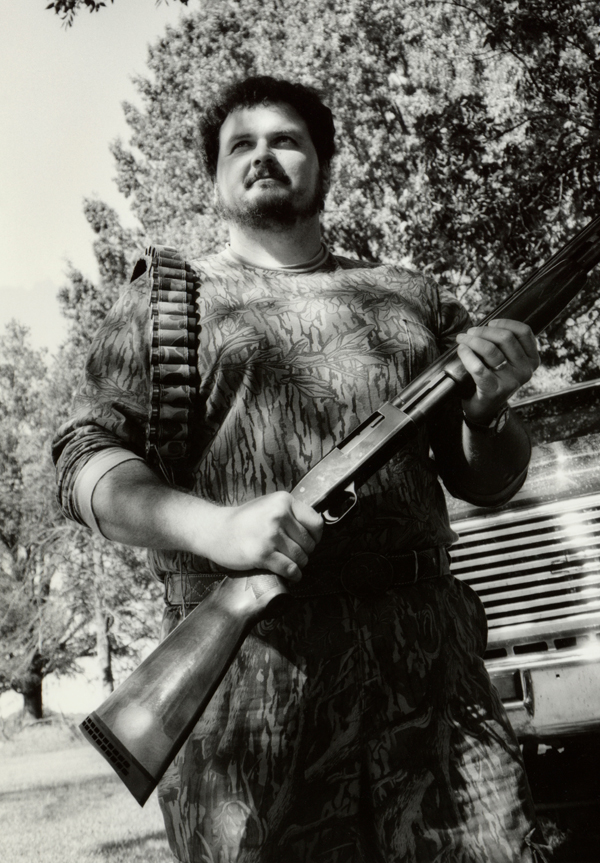 Man with rifle
Previous photo
Browse this Gallery
Next photo