I applied for a photo pass when Chuck Berry’s concert at Manchester’s Apollo was announced and was pleasantly surprised when my request was approved. Wary of Chuck’s legendary mood swings, I decided to buy a ticket just in case he changed his mind – at least then I could watch the gig.

Arriving at the Apollo with three of my mates, they split to take their seats and I went to get my photo pass. One of the security guys came over to me and said there was a problem. It appeared that Chuck had been staring at a blank wall in the dressing room for the last hour and wasn’t talking to anyone.

“So you might as well f*** off then,” I was told by a black suited gorilla. I replied that I’d bought a ticket and would like to watch the show. “Give me your camera, ‘cos you ain’t taking it in there.” I pointed out that there was hundreds of pounds worth of equipment in that bag and my insurance would be invalid if anything happened to my gear. He reluctantly let me take my camera bag into the auditorium. I took my seat as the security guy stood at the end of the aisle. He remained there, watching me watching Chuck Berry.

After 20 minutes or so he must have got bored and wandered off and I immediately whipped my camera out, stuck a zoom lens on and rapidly fired off all 36 available shots on the film. I took the film out and passed it to my mate four seats away just in case I got caught out.

Loading another film, I started shooting again when, halfway through You Never Can Tell, Chuck Berry stopped playing and started pointing in my direction. Suddenly, the security team were coming at me from both ends of the aisle. Chuck must have seen the reflection of my camera lens and I was dragged out and taken into an alleyway, now surrounded by four contenders for the heavyweight boxing title including the champion himself. He ordered me to open up my camera and to take out the film. He ripped it out of its canister, exposing it and ruining it forever. Waving the film in front of my face, he taunted, “You win some you lose some, you lost tonight you stupid little f***er.” When I asked, “How old are you, six?” he roared and lunged for me and had to be restrained. One of the other security guys advised me to beat it while I could, which of course, I did.

I met up with my mates after the gig and one of them handed over the secreted roll of film, another gave me a beautifully rolled and much needed spliff.

So, not the best Chuck Berry photo ever taken, but at least I got one to put on my wall. I suppose most people smile when they hear You Never Can Tell, thinking of that great dance scene in Pulp Fiction, for me it’s one night at the Apollo. 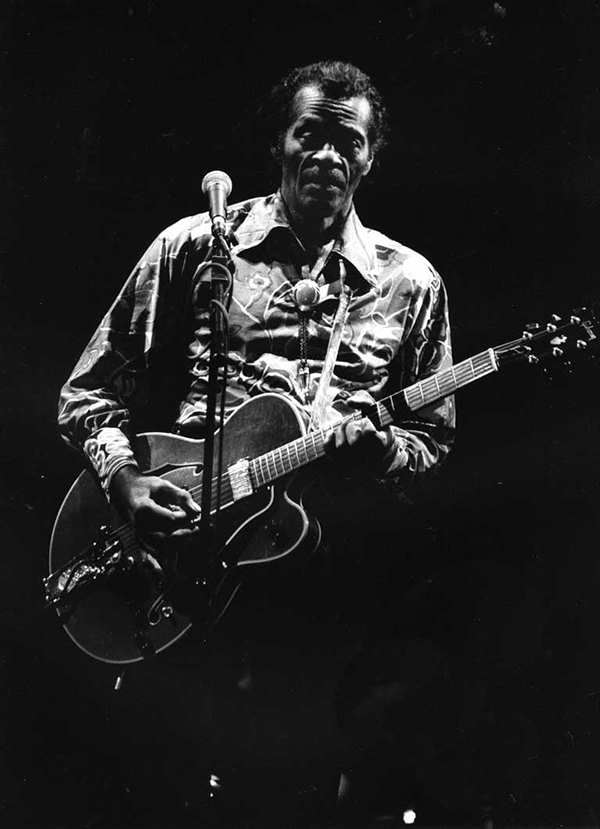