Adrian was often seen in the public houses throughout the district. He could also be seen dancing in the street and behaving like a man who had too much to drink, which was usually the case. The word, ‘character,’ is often over used, but probably not in Adrian’s case.

My friend Les, and myself arrived at Adrian’s detached bungalow in Ackworth  one summer’s evening, to take his photo for my upcoming exhibition, Locals. We’d arranged the shoot with Adrian a few days before and he’d said, “I’d best not have a drink then.”

He pirouetted out of the house with no shoes on, to greet us with a bottle of wine in one hand and a half empty glass in the other. Drink had clearly been taken with more to come by the looks of things. He bowed and grandly invited us into ‘The White House,’ as he called his bungalow. It had seen better days and was filled with home brew bottles and enough cans to keep an off licence going for a calendar year.

To say Adrian was a difficult subject to shoot is an understatement by any stretch of the imagination. He carried on drinking and wouldn’t keep still, was gurning most of the time and then dancing again and singing songs like he was performing at the London Palladium. I didn’t want to photograph him in this state – I wanted to portray him with some dignity and style.

Eventually, we persuaded him to have a cigarette break and to take a seat in the porch. I got my tripod and camera in position and Les had the lighting ready. I snapped a few quick shots while Adrian was having a ‘quiet moment.’ It was just as well, suddenly there were blue lights flashing outside, we turned to see two policemen approaching. Adrian was arrested and bundled into the police car.

We never did find out what he’d been up to – though we suspected that it may have been alcohol related. 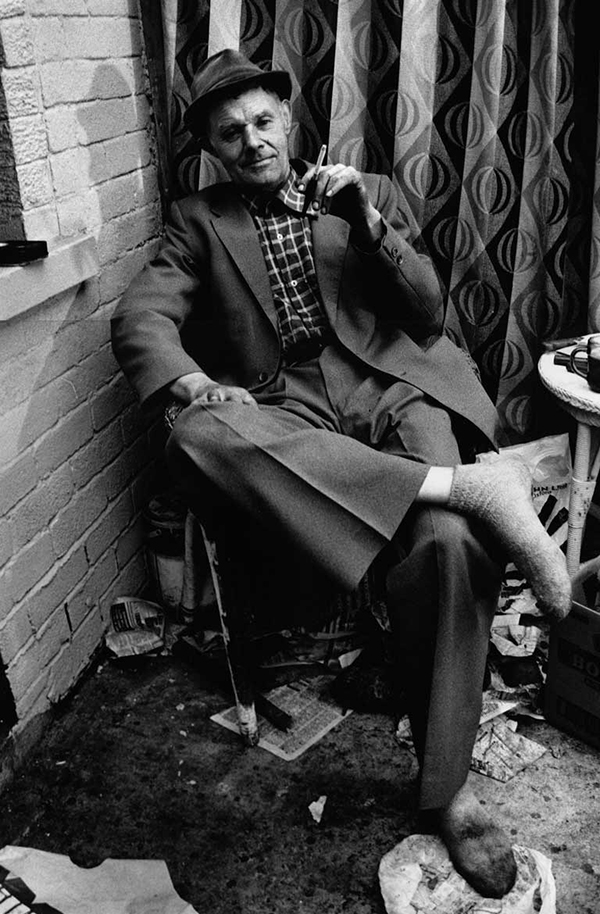