Not long after I took up my new job at the Leeds ad agency (mentioned previously), I was informed that I would soon be going on a business trip to New Orleans. Four of us went to attend a typographic seminar and to look at new typesetting equipment. We flew business class, which was nice.

We stayed in a wonderful hotel for five days by the riverside (years later it was destroyed by Hurricane Katrina). Every spare moment I had, I would go out and start learning how to use the second-hand Pentax I’d purchased a few weeks earlier. When I got back from the Big Easy, I had someone print me up forty 10 x 8 photographs from the trip. I thought they were marvellous and decided to visit Terry Cryer, the master photographer whose work had inspired me. I found out he lived in the Hyde Park area of Leeds.

He invited me into his home and I saw dozens of his photos on the walls, some of which I’d seen a few weeks earlier. I’d forgotten how wonderful they were and then felt sick as I reluctantly opened the box of shots I’d taken, realising I was in a different league and facing relegation and rejection.

Cryer started looking at my photographs and then commenced tossing them, one by one, into a bin at the side of the table where we were sat. He studied a few more closely and, thankfully, put them to one side. This carried on until there were thirty in the bin and ten spread out in front of us.

“Right lad, we can work with these. Bring your negs into the dark room and we’ll print ‘em up.” These are some of the kindest words ever said to me. It was my first time in a dark room and the start of a great friendship. Terry never advised me how to take photographs – he just said to find my own way. He did advise me about the technical side of things though, helped me set up my own dark room and taught me how to print. It was more than I could have expected when he first started tossing those prints into the bin.

This shot of the old dude with the cigar and umbrella is one of those photographs that survived the cull. 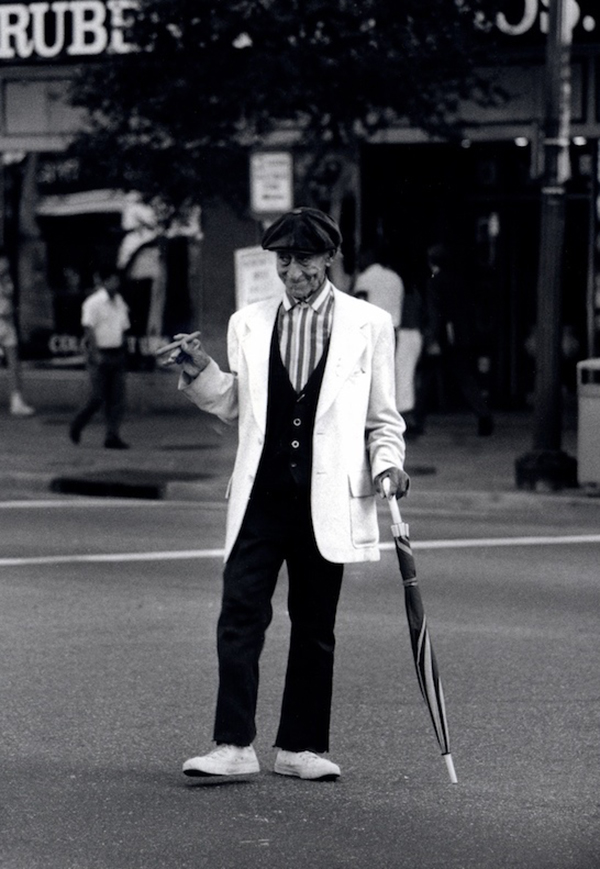