Ian Clayton, author of Bringing It All Back Home, which inspired me to start writing myself, has written this lovely piece to go with this photograph:

I sometimes think our odyssey to the southern states was like tumbling down Alice’s rabbit hole to meet a mad parade of characters, only to find it was a dream. Except for the four of us who went on that journey, Rev, Fuff, Les and me, it can’t have been a dream because we have Rev’s photos to show it really happened.

To be fair, you don’t have to look too far in New Orleans to find the eccentric, the oddball, the slightly off kilter. Neither do you have worry about approaching, quite often these characters come right up to you.

One morning down by the Mississippi we met in the space of five minutes two memorable men. First was Melvin The Hip Bone. He wore a powder-blue suit topped off with a powder-blue felt hat. He came towards us with an exaggerated gait, lifted his hat and wished us good morning. I happened to say, ‘That’s a grand style of walking you’ve got there.’ He smiled and said, ‘That’s the hip bone sir, I invented that walk and that’s why they call me Melvin The Hip Bone.’ And he continued on his way, swaying his hip bones like the craziest catwalk model you could find.

Next was Willie the Dancer Taylor, who danced towards us in a pair of tights. It transpired that they were his wife’s panty hose and he’d put them on fresh that morning. Rev asked if he could take his photo. Willie said he could, but it would cost two dollars and he’d strike a pose. Rev gave him his two dollars. We expected a plié at the very least. Willie stuck his tongue out. 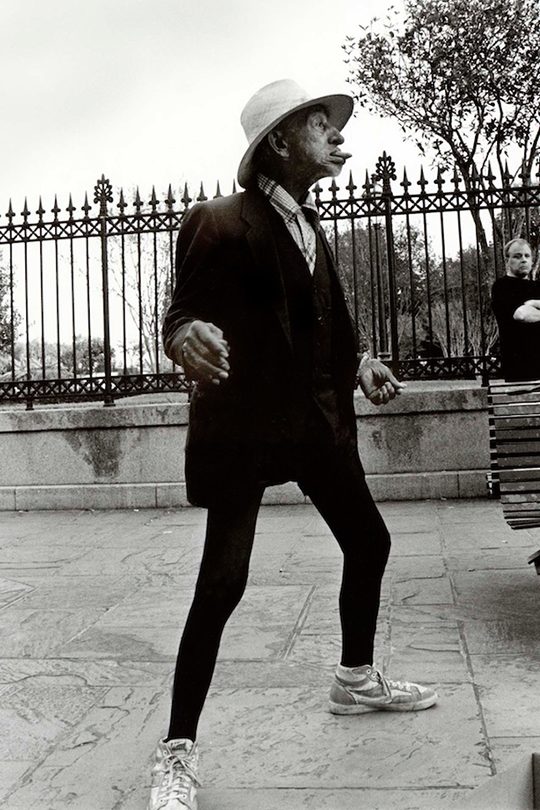