After taking the shot of Bobby Gillespie featured previously, I turned to see a manic looking Throb playing his guitar as his hair swung about wildly in front of his face. Normally I would bide my time to make sure that the light was just right or that the microphone wasn’t obscuring the artists face, but on this occasion none of that mattered, I realised this shot was gonna capture the man and the mood in perfect harmony. Seeing it come to life in the dark room the following day made me smile.

Robert ‘Throb’ Young joined Primal Scream, with former schoolfriends Bobby Gillespie and Jim Beattie, as the band’s bass player but he soon shifted to guitar. He was more than just a guitarist for the band though, with his leather trousers and untamed mane, he was symbolic of the rock’n’roll stance that defined the band, and his musical obsessions provided the gateway towards the band’s hard-rockin,’ Stones’n’Stooges moments.

He also provided the vocals for Screamadelica’s acid house cover of the 13th Floor Elevators’ Slip Inside This House. After the release of that landmark album, Throb remained with the band for 1994’s Give Out But Don’t Give Up through 2006’s Riot City Blues, at which point the guitarist decided to take a sabbatical from Primal Scream after nearly two decades in the group. “Let’s just say that he’s got some problems that he’s got to sort out for himself,” Gillespie said at the time of Throb’s departure. During his tenure with Primal Scream, he was credited as co-writer on each of the band’s original songs from 1987 to 2006.

“We have lost our comrade and brother Robert Young. A beautiful and deeply soulful man. He was an irreplaceable talent, much admired amongst his peers, In the words of Johnny Marr “Throb with a gold top Les Paul – unbeatable.” He was a true rock and roller. He walked the walk. He had “Heart & Soul” tattooed on his arm and i’m sure on his heart too. He once said to me “when we go onstage it’s a war between us and the audience.” He never let go of that attitude.”

Reading that again I thought to myself, ‘that’s enough to make a grown man cry.’ It nearly did. 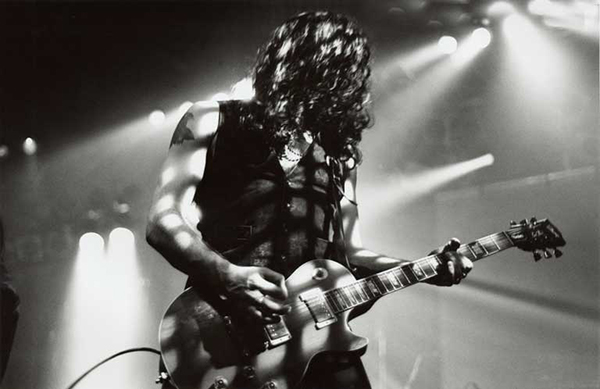